Basic Principles of Quantum Technology
Quantum technology is realized because of the various nanomaterials that exhibit quantum effects. One of the main principles of nanotechnology is that when a material is within the quantum regime (i.e. less than 100 nm in thickness), it exhibits quantum effects rather than the bulk effects seen with larger molecular structures.

Quantum technology bridges both the properties of various nanomaterials and quantum mechanics. This differs from bulk materials where the properties are governed by classic mechanics. One of the most fundamental principles that these materials rely on is electron confinement, which in turn leads to electron tunnelling. This is where the electronic signal can leave its confined space, even though the electron itself is still confined. Electron tunnelling is an excellent way of passing charge carriers through quantum materials, whilst keeping the overall electronic nature of the material confined to a given number of dimensions.

It is this confinement that create many of the quantum materials today. For example, 2D materials, are confined in one direction, so they have electronic movement in 2-dimensions, hence the name. The same applies for 1D quantum wires (nanowires) and 0D quantum dot, where the electrons are confined in 2 and 1 dimensions, respectively.

The confinement of electrons in materials can also give rise to a wide number of other principles that are widely utilized in quantum technologies, such as the uncertainty principle, quantum superposition, entanglement and decoherence.

Quantum Technology Applications
There are many materials that fly under the quantum technology banner. In this section, we look at some of these examples.

Quantum Computing
There are three key areas of quantum computing, which are quantum information technologies, quantum algorithms and quantum cryptography. Quantum computing benefits heavily from the use of quantum bits (qubit), which can be encoded into several degrees of freedom by manipulating the polarization, pathway, and other parameters of the bit.

Quantum information technologies are realized by using nanomaterials for a variety of functions that contribute to the quantum operations within these systems. Nanomaterials can be used to create ion traps, cavity QEDs, superconducting circuits and optical systems to help the passage of quantum information throughout a computing system.

Utilizing and inducing changes in a quantum system is a common approach for storing information and transmitting it. This can be applied to code certain quantum sequences using entangled photons within optical fibres for quantum cryptography approaches. Quantum materials that exhibit entanglement phenomena can also be used to speed up computer algorithms and create quantum algorithms which are exponentially faster than classic algorithms.

Quantum Photonics
Quantum photonics is a broad area which encompasses everything from spintronic devices to quantum wires used in waveguides. Quantum photonics works when nanomaterials absorb a specific frequency of light, which causes the electrons and holes in the material to recombine through coulombic interactions. This is known as an exciton.

If the electrons and holes are confined, the exciton can behave like an artificial atom. These artificial atoms can then be used as a pathway in quantum opto-electronic devices. Quantum photonics is widely used within the communication sector where the quantum-optical pathway can facilitate the transfer of quantum states from one location to another, even if the locations are remotely separated from each other.

Quantum Electromechanical Systems (QEMS)
Quantum electromechanical systems (QEMS) are nano-fabricated systems that use a series of transducers operating at the quantum limit. The quantum operation limit creates a highly sensitive system that is usable for both microscopy systems or for detecting the magnetic moment of a single spin.

There are many sub-areas to QEMS, for which there is a different application for the incorporated QEMS. The most common areas of interest are superconducting quantum interference devices (SQUIDs), coherent quantum electronics and single spin magnetic resonance force microscopy.

QEMS operate at a quantum efficiency level when the quantum energy exhibited by the device is greater than the thermal energy. There must also be a simultaneous quality factor that is of the order of 105. There are both optical and electronic systems that rely on QEMS and are realised by using an oscillator that forms an optical cavity, or moves in motion with an external magnetic field, respectively. However, the oscillator does require GHz frequencies, so there are some limits to the time scales required for moving charge around a small circuit. 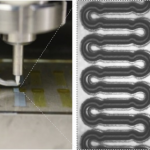